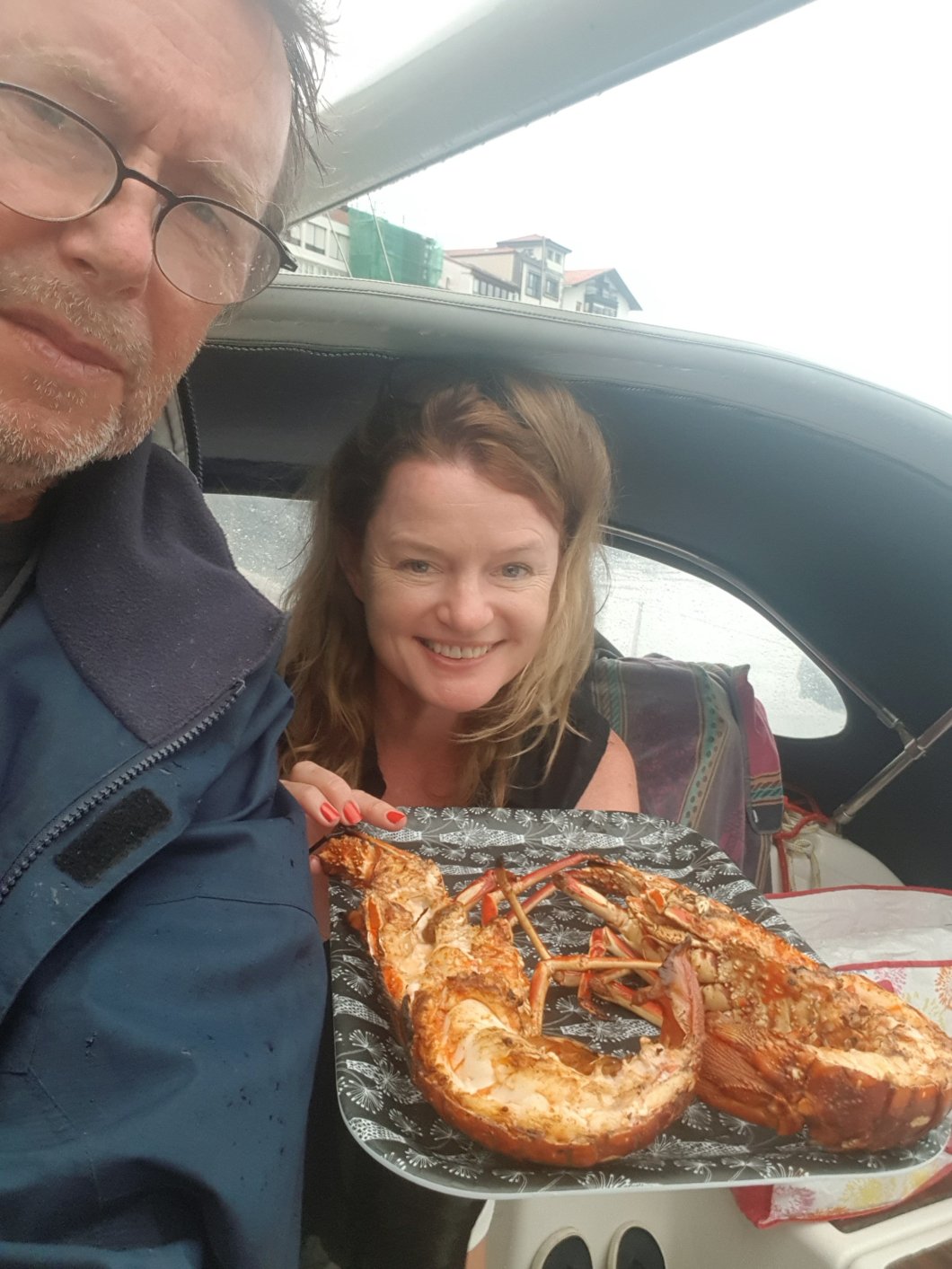 And on we go… we didn’t necessarily expect anywhere to be as charming as Ciboure, much less Guetteria, but apparently we were wrong. We arrived in Lekeitio by motor in about 4 hours. With very little navigational information, we weren’t sure what to expect, apart from a bay with an island connected by a submerged causeway. A possible anchor site on the northern shore of the small island was vaguely indicated by another blog, and we knew there would be a fortified harbor, with mooring “possible” along the sea wall.

Now we’ve heard that different regions have very different ways of trying up your boat. When we entered the harbor and went to tie up alongside the quai, our only options were to climb up a rusty ladder and onto the quai about 3 meters above us.

We arrived at low tide, and the tides rise and fall about 3.5 meters here. On the quai are large cast iron pilings about 20 meters apart. It took us a while to figure out how to tie up to these with our longest ropes on bow and stern, and a shorter rope holding us within reach of the ladder. It was a bit stressful, but once we got it sorted out, all was well.

There is absolutely no harbor master or port authority to contact. As a result, tying up here is absolutely free, but includes no facilities (electricity, water, toilet block…). Luckily, we didnt need those and the free part was just what we wanted! The quai above is home to dozens of restaurants and bars, beautiful harbor front buildings, and more.The town is… picturesque. Surrounded by misty mountains, the center of town has an exceptional cathedral with a monumental gilded altar piece. Beyond that, small streets and alleys wind all over, coming out on splendid plazas filled with playing children and people of all ages. Pintxos (tapas) bars overflow onto the streets and the whole place is alive with conversation and laughter. In this season, July and August, the whole town is animated from dawn well into the night.Kids love to jump off the sea walls, doing fancy dives and goading one another on. The harbor is busy with local fishermen as well as traditional Basque row boats. As luck would have it, our second day there they were having big races of these boats, with men’s and women’s teams coming in from all around. Lots of fun to watch.Yesterday, we tried the trick of hauling Peter up the mast in his climbing gear, with his harness attached to the spinnaker halyard and me working the winch. Several times a week, I’m reminded of what my mother would often say after some minor mishap” “and now, for my next trick” (today, I guess you might hear “hold my beer”)… We’ve been doing lots of tricks, and this one consisted of Peter getting stuck up the mast!I was hoisting him up there when the old, dry rope slipped off the lip of the winch and got tangled. Now, I would have figured out how to get him down (he’d have to create slack on the line by lifting himself up while I untangled the mess), but before I formulated that solution, an obviously experienced Marinette (woman sailor) climbed down and cheerfully took things in hand. It was good to see what she did, next time my reflex will be more immediate.It was great that we did this in the port for the first time, obviously. And the big lesson learned is that he should have been attached to a second line as well that could have held him while I freed the first. Now we know.A more polished maneuver was our changing of the mainsail sheet. Little by little, we’re changing all these ropes. Many of them look fine under the dodger, but when you start to pull them, you quickly see they’re stiff and dry and perfect candidates for causing snafus at just the wrong time.On our last day, we watched from the boat as the fishermen unloaded their catch and people came down to the docks to buy fresh seafood. Peter saw a guy leaving with what looked to be a bag of live lobsters and he double-dog dared me to go get us one for supper. So I did, and I’m proud to say, I did the whole transaction in Spanish! It turned out to be spiny lobster, and I’ll be downloading some video of it’s brutal, though skillful, demise.We’ve naturally been enjoying the wonderful Basque food and wines.This will surely require some editing, but right now we are hurtling (I’m not using the term lightly!!) across the bay of Biscay to our next stop – Bilbao!